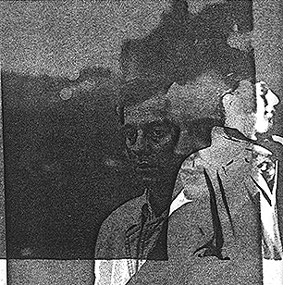 “Their total control over their instrumentation is such that they have no apparent limitations […].”

The Thrills Have Eyes. Interview by Dave McCullough (Sounds, February 28 1981)

“We go into a kind of Nuneaton Museum […] an old lady caretakeress guides us predictably to a “modern art” section, all dribbles of paint over confusing canvasses. Eyeless In Gaza, two men with the time-travellers look of the miners in D.H. Lawrence’s Nottingham, hated it! They turned, graphically, exaggeratedly, to the just adjoining traditional art section. Modern muck, aw we hate it! It was that kind of reaction. Ditto for the music they make.”

“It’s easy to work together when there’s only two of you, you haven’t got so many people to please,” says Pete, “If either of us don’t like something we don’t play it.”

“[…] you could get to like us. Anyone could – young punks, middle-aged housewives.” – Martyn Bates

“We’d like to get involved in creative projects that work on more than one level, such as film soundtracks and doing music for dance companies, things that have more of a permanence about them. Not that I think that what we do is totally transient, but I’m very interested in interpreting what someone else has done.” – Martyn Bates

Eyeless In Gaza – Letter from Here to There. Interview/letter with/from Martyn Bates. [One of my favourite interviews/letters.] (Vox magazine, 1982 circa Letters Written)

Rapid Eye Movement. Interview with Eyeless In Gaza at the release of Drumming the Beating Heart. (Not a very good interview, but … .) (?, July/August 1982)

“I think a hit would really change things – I’ve been thinking about stopping to do singles, because of the potential of what they could do to what we’ve got.” – Martyn Bates

Eyeless In Gaza – interviewed by Dale Ward. An interview around the time (1982) when Drumming the Beating Heart was released.

“I always feel the same way. We do a batch of stuff and put it out and think ”wow, that’s great! It’s really worked well!“ For it to come out on the record I have to give it a little time. I get lost in it.” – Peter Becker

The Gaza Stripped. This interview, by Adam Sweeting, is also related to the release of Drumming the Beating Heart. (Melody Maker, September 25 1982)

“I think this record is more of a mature record, because the first two were still very much like in our formative days. We recorded ‘Photographs’ two months after we met, and then ‘Caught in Flux’ and the 12 inch were recorded later the same year – and this was 1980. They’re the first and second batches of ideas that we had, whereas with this one we’ve stockpiled a great deal of material over a year, a year and a half, and we’ve been able to grow with it, pick it out and collate it into more of a cohesive thing.” – Martyn Bates

Eyeless In Gaza interviewed by Michael Björn and Joakim Norling. Last page here (could not be made into one PDF due to problems with Microsoft Word). (ID magazine no. 5-6, late 1982) (pdf, Swedish)

The Gaza Strip. Interview with Eyeless In Gaza by Dave Henderson. (Sounds, August 13 1983)

“We want success but we’re not desperate. I mean we haven’t dressed up in silver suits or anything.” – Martyn Bates

“I know the records are improving. I know they’re getting more easy to listen to but at the same time they’re still us, without selling ourselves short.” – Martyn Bates

“As for my melancholia … People see it as introspection, as if that’s necessarily a bad thing, as if it’s wrong to be contemplating. My musics never meant to be depressing or anti-life or negative, even if it seems evocative of that mood. […] – there’s beauty in a sad song. Why shouldn’t there be?” – Martyn Bates

Eyeless In Gaza – Letter from Peter Becker to MFTEQ [see below] sketching a history of Eyeless In Gaza and mentioning that they have begun working together again. (MFTEQ issue ‘0’, around 1991/2)

“I suppose our appeal was the quality of Martyn’s voice and the moodiness and energy of the music.” – Peter Becker

“After the release of the last album we did for Cherry Red, ‘Back From the Rains’, we were trying to get a major deal, we’d got a manager and we were thinking about a ”rock‘n’roll career,“ go up the ladder, progress, that sort of idea. I think we were very, very close a lot of times, but we just never found a satisfactory deal.” – Peter Becker

Thanks to The Empty Quarter for permission to publish this interview here. Carbon disks (formerly TEQ) had a good mail-order service with a lot of interesting music in their catalogue/listings.

Interview with Martyn Bates for the french magazine Omega. Interview by Spahi Amadeo was done in 1995. Text has been translated from french to english by Yves Ludwig – thank you! (Omega Magazine, Autumn 1996)
The french original article.

“Eyeless In Gaza could and should continue forever as long as Peter Becker an I both continue to enjoy our unique connection – it feels like it should last forever, this special link; ‘I dreamed I saw you, walking, walking in the world..... .’”

Very early letter, or rather statement, of what Eyeless In Gaza want, do and some lyrics and photos. Written by Martyn in his characteristic hand-writing. (0533, no. 4, September 1980) (pdf)

Ambivalent Scale – the origins. A short article by Phil Clarke. Also here is an early listing from the same magazine of the product catalogue (pdf). (Damn Latin, 1980)

The sound is rough, the vocals unintelligible but that doesn’t stop the audiences enjoyment of the music (some people actually danced!) Despite the fact that there are only 2 of them (tho they did ask if there were any drummers in the room) EIG make a full, funky, interesting sound.

Flyer for Looking Daggers with lyrics and photos and for an upcoming gig as support to This Heat at Lanchester Polytechnic, October 1980. (Autumn 1980) (pdf)

Flyer for Invisibility with photo and lyrics. (1981) (pdf)

“Their music requires more of the listener than a quick casual glance. It could remain a well-kept secret.”

Imperial College [– “What are Eyeless doing now after the release of ‘Sun Bursts In’?”] by David Elliott (Sounds, November 24 1984)

An article on how Eyeless In Gaza use “sequencing” at concerts – Pete Becker is interviewed on the subject. (Electronic Soundmaker, August-September 1985)

Back from the Rains. Comments on every song by Martyn Bates made around the time of the release of the album. (The Beating Heart no.3 (fan club zine 84-86), 1985)

The liner notes by Martyn Bates and Pete Becker to the wonderful archive album Orange Ice & Wax Crayons. Martyn and Pete make interesting comments on all the tracks of the album and on the album as a whole. Now the album is deleted, but the liner notes really says a lot about Eyeless In Gaza and how they themselves look upon their activities up until around ’86. (The comments were written in October 1991 at the “rebirth of Eyeless”.)

The Gaza Trip. Short article announcing the return of Eyeless In Gaza. (1993)

These will not be the last words!